In the Field with MIM’s Curators - Musical Instrument Museum

Representing musical traditions from every country is an essential part of MIM’s mission. Finding these instruments isn’t always easy—MIM’s curators have sometimes traveled thousands of miles to locate instruments for the collection. In fieldwork trips, curators also document rare musical traditions and build partnerships within musical communities. By working with MIM to display their instruments, musicians and instrument makers can share their musical heritage with music lovers from around the world who visit the museum. MIM’s conservation efforts ensure these important objects are preserved for future generations. 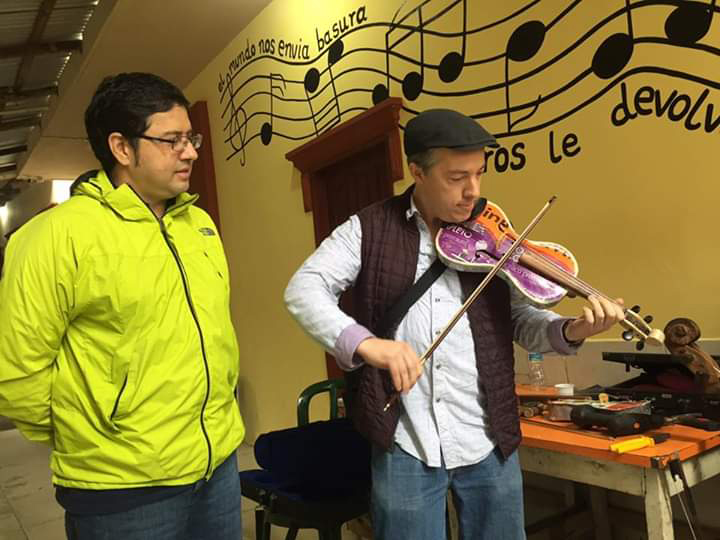 On a trip to Paraguay, curator Daniel Piper (right) tests a new violin model at the school for the Recycled Orchestra of Cateura.

As MIM seeks to share and preserve the musical traditions of people around the world, why is field collecting important?
Most musical instruments in the world don’t have a commercial market of stores, manufacturers, or individual makers selling the instruments—that’s the minority of instruments. When talking about instruments throughout the world, whether recent or older, you often have to find and acquire them through individuals, either private collectors or directly from musicians and their families in contexts where they are or were played. Sometimes the only way or one of the most effective ways to get instruments for the museum is to go to the location where the music culture is alive.

How has fieldwork impacted MIM’s collection over the years?
Field collecting or traveling was so important in the beginning years of the museum because we needed to start by building a great network of relationships. This was crucial in getting thousands of folk and traditional instruments from around the world. Fieldwork has continued to be important but focused on specific places and acquisition goals that need it—thus far more in Latin America, parts of Asia, and Africa—with our curators either traveling or working with consultants who can be intermediaries for MIM. 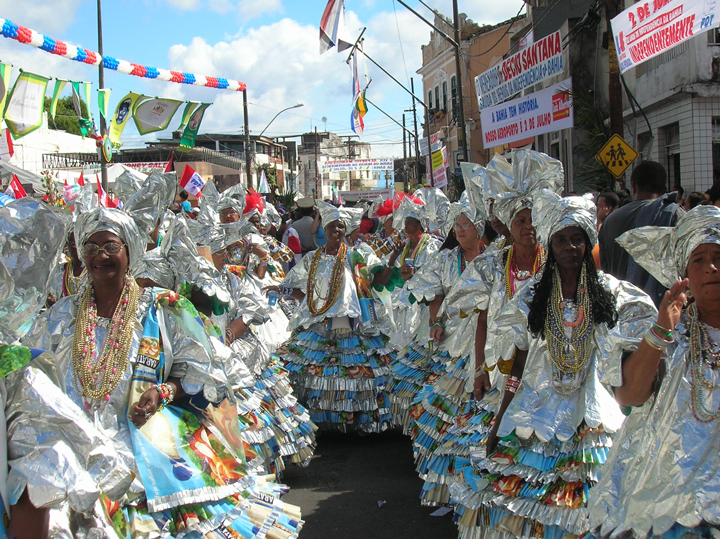 A parade of Candomblé priestesses photographed by Piper during a trip to Salvador, Bahia, Brazil

Where have you traveled recently? How did you decide what instruments to acquire?
My last major trip was in Brazil. I’ve been interested in African-descendant groups in the Caribbean and Brazil since the mid-’90s or so. Gradually, I started getting introduced to different bands. Olodum is a bloco-afro group from Bahia that started in the ’80s. They recorded with Paul Simon on The Rhythm of the Saints in 1991. When that Paul Simon album was produced, I looked it up, thinking “what is that sound, that sounds so cool!” In 1996, they did Michael Jackson’s “They Don’t Care About Us.” Michael Jackson flew down there and did a video for the song in a historic Afro-Brazilian neighborhood. They’re a street band from the time when Carnival groups dedicated to African heritage first took off in Brazil. Another revolutionary group was Ilê Aiyê in the ’70s—they were the first bloco-afro and inspired top recording stars in Brazil like Gilberto Gil. So, these two groups had been in my mind. I decided when we were working on the Brazil exhibit, that if we’re displaying Carnival drums, we should represent Bahia with a drum from Olodum and one from Ilê Aiyê.

Join MIM curator Daniel Piper on a Virtual Visit to MIM’s Brazil exhibit as he shares some of his favorite percussion instruments on display.

What was it like collecting those instruments in Bahia?
I acquired the drum from Ilê Aiyê first, and I only had one day left to meet with the director of Olodum before my flight back. I needed time to meet, follow up, pack the drum, and ship it. When I got in touch with Olodum at their rehearsal space, the business manager said the drum I wanted was in a storage shed and the only guy with the key was a famous music director who’s been part of the group at least 20–25 years. So, the assistant director and I took to the streets of the historic Pelourinho neighborhood looking for the director, trying to find him. Finally, we found him, the assistant director immediately left, and I got into the storage shed with the music director to choose the right drum. He just gave me this drum they’d played for 20 to 25 years (it could even have been in the Michael Jackson video)—before we’d signed a contract or paid the band. I was without anything—we couldn’t even find a bag to carry it—and I was a half mile from Olodum’s main space. I was hauling this metal Olodum drum around, bringing it through the busy pedestrian cobblestone streets of the Pelourinho to pay the band and sign the contract. It all worked out just in time for me to pack and ship the drum the next morning before my flight. I also got a photo (below) of me with the drum and Olodum’s current leader. 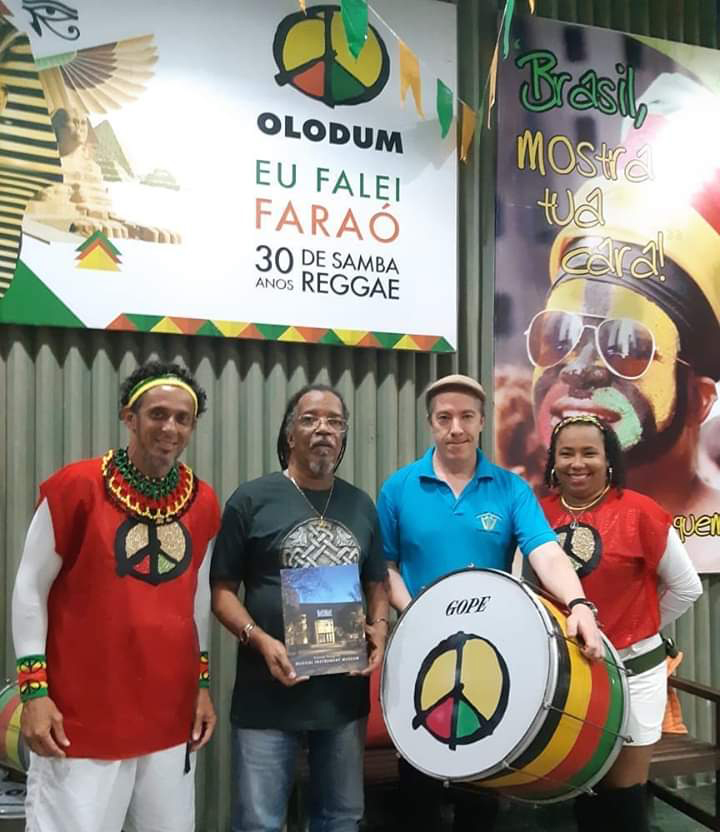 Besides instruments, you’ve also produced video and photography of musical performances and traditions through your fieldwork that are now part of MIM’s exhibits. Can you tell us about that process in Brazil?
Before I flew to Salvador to meet with Olodum, I produced footage of Brazilian bumba-meu-boi from the State of Maranhão in the far northeast. I visited multiple boi groups, including the two in the video now in MIM’s exhibit, and acquired great instruments from them. I filmed one of them until 2 a.m. at an all-night-long boi or “bull” baptism party with traditional dance and costumes. I had to squeeze my way into the center of a massive group of hundreds of participants. 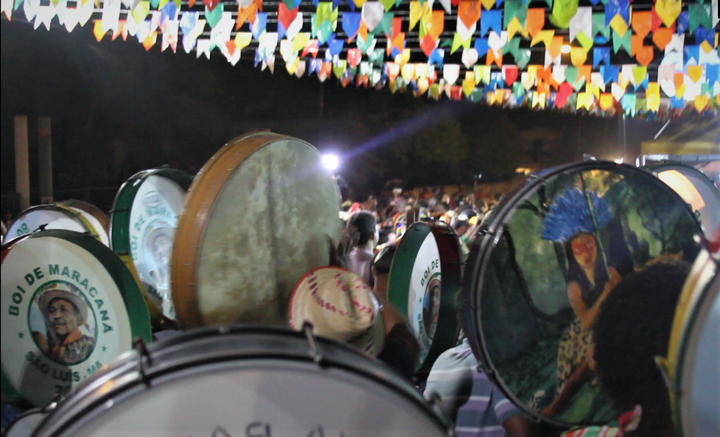 What do you enjoy most about fieldwork?
The people. I became an ethnomusicologist and later a curator because I love everything about people and their differences and culture—not just their instruments and the way they play music but everything about daily life, the customs, ways of speaking, ways of dress, the mannerisms. All of that is something I’ve wanted to experience firsthand.

Over and over again, just about everyone I meet is so humble and hospitable, and despite dramatic differences in culture, socioeconomics, education, belief systems, age, or gender, we realize we have far more in common than different just by being human. That’s something I need. I love having that reminder and the lived experience of our common humanity. That is really the underlying mission of MIM and why people love coming to MIM—and during fieldwork I experience the mission of MIM in a very direct, life-changing way. I’m trying to transmit to our guests a little bit of that feeling, that lived experience, in as authentic a way as I possibly can.

Field collection is just one of the ways curators acquire instruments—behind MIM’s exhibits are many stories of collaborations with artists, music industry partnerships, and more. We’re grateful to all the individuals and communities who have shared their musical traditions with us.